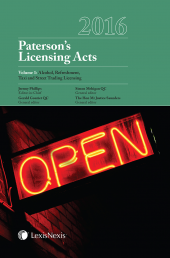 James Paterson, who introduced the work and authored the first ten editions, could never have foreseen that his book would be going strong 114 editions later; or that it would have an editor-in-chief, three general editors and a consulting editor; be in two volumes running towards 6000 pages; and come with a CD-ROM (containing the two volumes plus other historical material).

He would have been incredulous  to find that it now comes in three versions: print, ebook and LexisNote or a combination thereof. Published by Lexis Nexis Butterworth it is priced from £315 to £393 depending on format(s).

Paterson’s has long been recognised as the leading textbook authority on licensing. It is the definitive work of reference on licensing law in England and Wales and provides a detailed and clear analysis of new and forthcoming reforms; as well as incorporating relevant legislation, regulations, orders, standard forms and precedents. It contains most of what is needed in one place and is regularly updated.

Four major areas of licensing are covered: alcohol and entertainment, gambling (titled Betting, Gaming and Lotteries), taxis and street trading. With its relative complexity and copious material gambling takes up the whole of volume 2 while the others are grouped together in the slightly lengthier volume 1.

There is no competition from other volumes so far as gambling is concerned with Philip Kolvin’s Gambling for Local Authorities: Licensing, Planning and Regeneration published in 2010 and the third edition of Smith & Monkcom: The Law of Gambling (previously The Law of Betting Gaming and Lotteries) published as long ago as 2008. However, a fourth edition of Smith & Monkcom is scheduled for August 2016. Interestingly, two previous editors – Stephen Monkcom and Kevin De Haan – are joined by two of the Paterson’s team – Jeremy Phillips and Gerald Gouriet. Published by Bloomsbury It is available to pre-order at £334.93.

Most of volume 1 is taken up with Licensing Act 2003 matters; alcohol, entertainment, clubs and late night refreshment. The 2003 Act spawned a number of volumes both edited and single authored published at prices from around £50 to £120. At the lower end of the price range two good but now dated introductory texts are Russell Hewitson’s Licensing Handbook (2012) published by The Law Society and Kevin Pain’s Licensing Practice & Procedure (2008).

More comprehensive, and highly recommended, are Philip Kolvin’s excellent and extremely useful edited volume Licensed Premises: Law, Practice and Policy (2013) published by Bloomsbury Professional and the leading single authored, much praised text Manchester on Alcohol and Entertainment Licensing Law (2012) published by Woods Whur Publishing. The former covers a broad range of matters and as the Foreword states this is a practical policy volume, not a law book. The latter is a law book and provides a superb route map through the legal provisions. A new edition of Manchester is in the pipeline for 2017.

Taxis and street trading are recent additions to Paterson’s. These sections are far less comprehensive than those on gambling and the 2003 Act but nevertheless are very welcome and provide a clear outline of the relevant provisions. The leading work on taxis is, of course, Button on Taxis: Licensing law and Practice (2009) published by Bloomsbury Professional with a new edition scheduled for November 2016.

Of the other areas of licensing which include guns, zoos, tattoo parlours and scrap metal it is perhaps sex establishment licensing which would be most welcome if the editors considered further expansion of the work as desirable.

The Preface to the alcohol and entertainment volume contains an excellent survey of developments in 2015 (noting this as the tenth anniversary of the coming into force of the 2003 Act) while volume 2 deals with the sole case of note since the last edition and also lists new Gambling Commission publications. The wealth of experience in the editorial team ensures that Paterson’s remains an essential tool for the serious licensing practitioner and others engaged with licensing. It provides an indispensable resource for practitioners, local authorities and others. As such it is highly recommended and a sound investment.

Housing Allocation and Homelessness Law and Practice sets out the legal obligations of local housing authorities when allocating social housing and assisting those who are homeless. Jennifer Phillips… Read more...