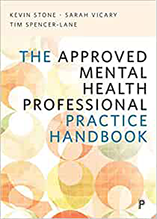 This handbook provides in-depth guidance on all key aspects of being an Approved Mental Health Professional and considers the ethical challenges involved in the role. Alex Ruck Keene gives his thoughts on the text.

This book fulfils a very important role for those who are training to become Approved Mental Health Professionals, those acting as AMHPs, and – I suggest – those working alongside AMHPs. It does not seek to be a one-stop-shop for the legal provisions that are so central to the discharge by AMHPs of their role (nor to replace the acknowledged Bible of the law in this area, Richard Jones’ Mental Health Act Manual[1]). Nor does it seek to direct AMHPs in the way that the Codes(s) of Practice to the Mental Health Act.[2] Rather, it seeks to put the role of the AMHP into its wider context, and to enable putative and practising AMHPs to reflect upon their complex – and crucial – role. It does so in clear, accessible text, divided into three parts: (1) the AMHP in context; (2) the AMHP in practice; and (3) the AMHP in theory.

A key message of the book is the evolution both of mental health (and connected) legislation and its application in practice – and the authors even manage to address the (so far unimplemented amendments to the MHA 1983 contained in the Coronavirus Act 2020, as well as flagging areas where further change is likely, to be addressed in online resources (the page at present awaiting updates).

The authors are to be congratulated on a work which contains a huge amount within a (relatively) short compass, and will be sure rapidly and rightly to be bought and thumbed extensively by those working in this complex but vital role.

[1] Although not referred to in the handbook, a rather easier read for those who want to navigate their way through the provisions of the MHA is the opening part of the Mental Health Tribunal Handbook (LAG 2015), which contains an excellent and accessible outline of the Act.

[2] One of the book’s strengths is the way that it addresses the numerous differences between the way that the MHA is implemented in practice in England and Wales, not least through the operation of separate statutory Codes for both.

[Full disclosure: I was sent a review copy by the authors. I am always happy to review works in or related to the field of mental capacity, health and mental law (broadly defined)]

Alex Ruck Keene is a barrister at 39 Essex Chambers. This review first appeared on his Mental Capacity Law and Policy blog.

James Paterson, who introduced the work and authored the first ten editions, could never have foreseen that his book would be going strong 114 editions later; or that it would have an… Read more...