The removal of Monitoring Officers and heads of legal from the upper echelons of local government presents a serious problem for the future of legal departments and weakens organisational governance as a whole, argues Phillip Horsfield of Lawyers in Local Government. 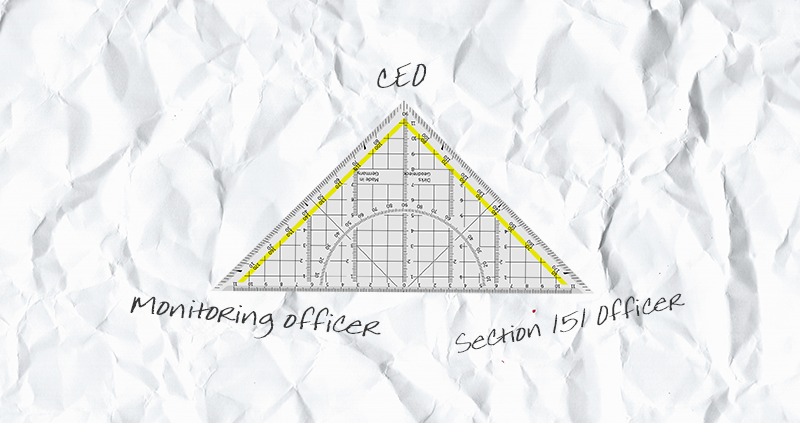 The role of the Monitoring Officer is key to upholding standards within local government, and their ability to work closely with the CEO and Section 151 Officer (“the Golden Triangle”) is essential to good governance. The report by the National Audit Office on Local Authority Governance (released January 2019) examined whether local governance arrangements provided local taxpayers and Parliament with assurances that local authority spending achieved value for money and that authorities are financially sustainable.

The report was welcome, but it missed a key recommendation to include Monitoring Officers in a review of the impact of status reduction and efficacy of their statutory reporting arrangements; instead restricting it to 151 Officers only. To talk about the S151, the CEO or the Monitoring Officer separately risks weakening the triangle of good governance; the CEO, the S151 Officer, and the Monitoring Officer all need to be at the heart of decision making and strengthened in their entirety rather than in part.

LLG have long argued that the increasingly lower status of Heads of Legal in many local authorities affects their ability to bring influence to bear on material decisions; places considerable strain and conflict on Monitoring Officers and leaves them susceptible to targeted campaigns that weaken organisational governance as a whole.

Whilst the demands on the local government lawyer continues to grow, we have witnessed, through restructuring, the downgrading of Directors of Law and Monitoring Officers from 1st and 2nd tier, to 3rd and even 4th tier in numerous authorities. It is no surprise to LLG that the findings of the Legal Department of the Future survey witnessed 67% of respondents reporting that the legal department is now more reactive than strategic as it is not involved early enough in the decision-making process, with 61% reporting it had made the performance of the role of Monitoring Officer more difficult.

The erosion of MOs and Heads of Legal from the top tier of local government fundamentally undermines the effectiveness of those appointed to safeguard such principles. So concerned are we at the impact of this, we have launched our “Golden Triangle” campaign to raise the profile and status of monitoring officers; promote the importance of being at the top-tier and highlight problems such as access to senior officers and poor decision making when the status of the position is downgraded.

LLG’s arguments were given weight in the Committee on Standards in Public Life report on Ethical Standards in Local Government. The report set out several recommendations and best practice points to revamp the standards regime and support those engaged in democracy.

For too long, unacceptable standards of behaviour from a minority of councillors have had a negative impact on decision making, cohesiveness, and culture. The recognition of the need for increased statutory protection for Monitoring Officers as the lynchpins of the standards regime and guardians of lawfulness is to be welcomed as a mechanism to strengthen the governance of our organisations.

LLG shares the view with the Committee that an ethical culture requires a Monitoring Officer who is professionally supported by the Chief Executive and S151 Officer. Indeed, the Committee’s Chair, Jonathan Evans stressed in an open letter in September that “standards in public life have rarely been more in the spotlight than they are today”. LLG continues to see examples of poor behaviour and bad practice which undermine and diminish the role of the monitoring officer and lawyer in local government practice. We hear frequent examples of inflammatory, bullish language and behaviours. Whilst in the minority, even one incident ripples through the profession and undermines the very core of open, ethical and accountable governance.

It is LLG’s mission to assist our members to enhance and protect good governance within the organisations of our members, ensure that the status of all local government lawyers promotes this, and the protection of Monitoring Officers in their statutory role ensures that we are able to uphold the governance of our authorities.

LLG are liaising directly with the Ministry of Housing, Communities and Local Government to push for a review of Monitoring Officer status alongside that of the 151 Officer to ensure the importance of the role is recognised and understood. Democratic accountability, compliance, sustainability, openness and transparency must be at the heart of every debate. To be truly effective, the officers in the Golden Triangle must unite on equal terms to ensure all voices are heard.

Phillip Horsfield is president of Lawyers in Local Government.