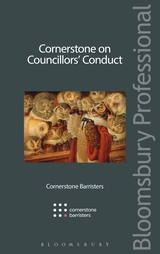 L.P. Hartley once told us that the ‘past is a foreign country; they do things differently there’. However, American astronomer and astrophysicist, Carl Sagan thought that to understand the present we need to know the past. And with the turbulent river of local government conduct regulation, much water has flowed under the standards bridge since the first National Code of Local Government Conduct was issued in 1975 following the Poulson corruption scandal.

The excellent and comprehensive Cornerstone on Councillor Conduct published by Bloomsbury (of Harry Potter fame) on 29 October 2015 (and authored by various Cornerstone barristers) therefore starts with the standards small bang of the 1975 Code. It then skilfully navigates its way through the dense and dangerous jungle of intervening statutory, guidance, caselaw and other foliage from the former Standards Board regime (following the Donnygate scandal) to the present slimmed-down but imperfect present. And also, (no doubt to the relief of those west of Offa’s dyke, whose legal textbook needs are now often imperfectly accommodated) there’s a chapter on the Wales standards regime.

But why local government standards at all? Head of Chambers at Cornerstone Barristers, Philip Kolvin QC, sets the backdrop in his Preface, pointing out that trust in politicians is at a particularly low ebb. Recent research by Ipsos Mori indicated that only 16% of the population generally trust politicians to tell the truth. The picture in the north of England is worse at 11%. But worst of all is with council tenants, where it sinks to ‘an astounding 8%’.

So there’s clearly work to do to generate (as the former Standards Board had put it) ‘confidence in local democracy’. For the public need to be able to trust those representing them to take decisions unsullied by any reality or perception of personal interest and to behave in the way they can reasonably expect of those in public office.

But (and there’s always of course a ‘but’) there’s a tension between public expectations of probity in those entrusted with public power and the strong wish by those who wield that power to be allowed simply to get on and do their job without undue complexity of regulation. Nor to have to endure nitpicking, malicious or vexatious interference or complaint by those whose motives can often be dubious. So Labour, when in office, brought out a revised Model Code of Conduct order in 2007. They offered their revised regime as ‘clearer, simpler and more proportionate’. But as Cornerstone notes, the 2007 interests provisions ‘remained highly complex’.

And many politicians across the board increasingly resented the constrictions of what was widely viewed as a somewhat disproportionate and ‘Stalinist’ regime giving too much power and influence to officers to stifle the local elected politicians’ democratic mandate. Former Communities and Local Government Secretary, Eric Pickles, therefore pledged to axe the ‘whole Standards Board regime consisting of a centrally prescribed code of conduct, standards committees with the power to suspend councillors and an unelected central body’. For in his view the ‘standards board regime became the problem, not the solution’. This was because allegedly unsubstantiated ‘and petty allegations, often a storm in a teacup, damaged the reputation and standing of local government, as well as wasting taxpayers’ money’. The view was that abolishing ‘the regime will restore power to local people’.

Nevertheless, many in local government (both officers and members) believe that in drastically slimming down the regime, the Government managed to throw the standards baby out with the regulatory bathwater. This applies in particular to sanctions. As the Committee on Standards in Public Life has remarked: ‘The only sanctions now available, apart from through the use of a political party’s internal discipline procedures are censure or criminal prosecution for deliberately withholding or misrepresenting a financial interest. We do not think these are sufficient.’

But things are as they are and that’s the territory to be navigated by local authority councillors, monitoring officers and others responsible for (and subject to) the operation of the system. Cornerstone explains this effectively. Substantive obligations are covered with accessible treatment of (amongst others) personal interests, bias and predetermination, equality and discrimination and election issues. Practical life is breathed into dry law through numerous question and answers and case studies to illustrate the kaleidoscope of conduct scenarios that may give councillors pause for thought. The complaints procedure canvasses the legal requirements, including how authorities should react as well as investigation, hearing processes and outcomes, together with read-across to wider civil and criminal law implications.

A chapter on the different means of challenging council decisions (including judicial review, the Ombudsman and Freedom of Information) is useful not only for lawyers but for all in local government who need to understand the often subliminal implications of decisions. And just in case those in public office may be feeling a little too relaxed, a chapter on criminal offences (under the Localism Act 2011, misconduct in public office, Bribery Act 2010 and election law) should prove both sobering and informative. The appendices contain some useful statutory, guidance and summary caselaw with a substantial Appendix F offering primary Wales regime material.

In his Foreword, former Local Government Association Chairman, David Sparks, said this book ‘provides an invaluable resource for councillors, and those who seek to understand the law that applies to councillors’. I agree and would recommend this short but comprehensive and easily navigable work to all monitoring officers and others who need to pilot (or voyage in) the fragile standards ship as it negotiates the treacherous waters of public expectation, political power and human frailty.

Nicholas Dobson is a Consultant with Freeths LLP specialising in local and public law.

James Paterson, who introduced the work and authored the first ten editions, could never have foreseen that his book would be going strong 114 editions later; or that it would have an… Read more...