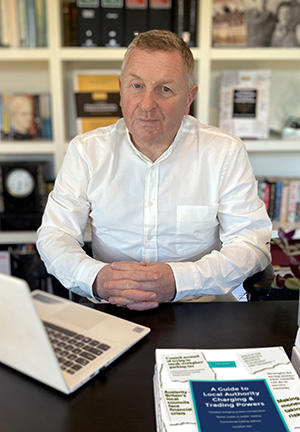 These are frequently asked questions to Rob Hann from colleagues in Local Government via the Sharpe Pritchard ‘Ask-the-Author' facility concerning the subject matter of his books on local authority companies, partnerships, charging and trading.

(1) Can a local authority have the power to operate with a commercial purpose under the General Power of Competence?

The General Power of Competence enables a local authority to have the “power to do anything that individuals generally do” under s1 of the Localism Act 2011 (“2011 Act”). Where a local authority wishes to operate for a commercial purpose then s4 of same places requirements on local authorities exercising their power under s1 of the 2011 Act. In particular, s4(2) requires a local authority do those things through a company in order to exercise its general power. A company under s4(2) means a company set up under the Companies Act 2006 or a society registered or deemed to be registered under the Co-operative and Community Benefit Societies and Credit Unions Act 1965 or the Industrial and Provident Societies Act (Northern Ireland) 1969. (s4(4)(a) and (b) of the 2011 Act).

(2) We are a local authority wishing to set up a trading company. What considerations should we take into account?

There are many and even though it is comparatively easy to set up a company it is crucial for local authorities to carefully balance and weigh up the advantages and disadvantages of doing so and to develop a business case which clearly identifies reasons for doing so. Local authorities need to be aware of competing interests and potential conflicts of interests that may arise when creating a new trading business. Among other things, important considerations include: (1) taxation and VAT; (2) how a local authority manages the overall structure of subsidiaries which are owned by it; (3) how central support services are delivered and paid for; and (4) any governance and safeguarding procedures which need to be in place in order for the local authority to meet its obligations, whilst the trading company meets its duties under the Companies Act 2006.

(3) Can a local authority use a Limited Liability Partnership as its trading company vehicle?

No. The range of corporate vehicles contained in both the Local Government Act S 95 and the Localism Act 2011 (section 4) do not extend to Limited Liability partnerships (LLPS). However, A Limited Liability Partnership could be an option where a local authority is not primarily acting for a commercial purpose but is pursuing other objectives e.g. economic development or regeneration objectives. If acting for a commercial trading purpose, s4 of the Localism Act 2011 requires a company that has been set up under the Companies Act 2006 or a Bencom (see Q 1 above)..

S93 allows local authorities to recover the cost of providing services that they would not have ordinarily been able to justify or been able to provide. There is a general duty to ensure that the annual income from charges does not exceed the cost of provision of those services in accordance with s93(3) of the LGA 2003.

S93 does not apply where there is a specific charging power for a particular service in another piece of legislation (in accordance with s93(2)(a)) or if there is legislation which expressly excludes a local authority from charging for a service (s93(2)(b)).

(5) Can you tell us whether the best value duty applies generally to a police authority?

Generally: No. Section 1 of the Local Government Act 1999 imposes the Best Value Duty on ‘local authorities’ which includes (though not limited to):

“(a) an English local authority;
(b) a National Park authority;
(c) the Broads Authority; and
(d) the Common Council of the City of London in its capacity as a police authority…”

Previously this list did include police authorities, however that was removed by the Police Reform and Social Responsibility Act 2011 (which also introduced PCCs) and replaced with that specific inclusion of the Common Council of the City of London.

(6) Can a Public Authority contract out of their Human Rights obligations under the Human Rights Act 1998 by using a private company to provide a service?

Generally, no. As section 6 of the Human Rights Act 1998 (HRA) imposes a duty on all ‘public authorities’ to act compatibly with European Convention on Human Rights.

This becomes important when you consider that many public bodies increasingly rely on private contractors to fulfil public functions (outsourcing) such as contracting with housing associations to carry out some functions of a social landlord and contracting with private care homes to provide care.

The Courts have held that a private company performs a public function when it is closely associated with the local authority relying on its services. For example, in Poplar Housing v Donoghue, a registered social landlord was a public authority when attempting to terminate a tenancy originally granted by a local authority - the role of the housing company was so closely assimilated to that of Tower Hamlets Council that the housing company was performing a public function.

This may place a may place a positive obligation on a local authority to prevent human rights breaches of, for example, care home residents whose care it has commissioned from the private sector. This can be done by ensuring the relevant private company has a good track record at procurement stage and ensuring ongoing contract management.

Rob Hann is Head of the Local Government team at Sharpe Pritchard. He has over 30 years in local government, having worked for several local authorities and as the ex-head of legal at 4ps/Local Partnerships for many years.

He is also the author/editor of two major guides on Local Authority Charging and Trading (which is available as free download) and Local Authority Companies and Partnerships both of which are now exclusively available through the Sharpe Edge platform in e-format.

Got a question? Click here to This email address is being protected from spambots. You need JavaScript enabled to view it..

This ‘Ask-the-Author’ portal facilitates direct communication with Rob from local authorities, who may wish to explore ideas, questions and issues affecting PFI contracts, local authority income generation initiatives, charging, trading, LA Companies, powers and other projects and programmes that local authorities might be involved with or might be contemplating. Please note, however, that the ‘Ask-the-Author’ facility is not designed to replace or be a substitute for detailed legal advice on specific issues.

The importance of due process, communication and fairness in employee conduct investigations – what you need to know.

Julie Bann and James Hughes discuss the importance of fairness in employee conduct investigations, taking a look at the London Borough of Hammersmith and Fulham -v- Mr S Keable case.

The LADs are Alright

Laura Campbell discusses liquidated damages in construction contracts, focussing upon the long-running Triple Point saga which ended in the Supreme Court this year.

Rob Hann and James Goldthorpe examine the introduction of Clean Air Zones to improve air quality across the UK.

Michael Comba considers a case in which the High Court dismissed an employer’s argument that an adjudicator lacked jurisdiction because the referral concerned three separate payment applications and, therefore, comprised three separate disputes.

Warm feelings or hot air: the Heat and Buildings Strategy and Heat Networks

This week the government published its Heat and Buildings Strategy (Strategy). This contained vital innovations and essential step changes in terms of how heating is provided, writes Steve Gummer.

Not so personal messages: R. (on the application of Good Law Project Ltd) v Secretary of State for Health and Social Care and Abingdon Health Plc [2021] EWHC 2595 (TCC)

Nicola Sumner, Juli Lau and Beth Edwards look at The Good Law Project's challenge of the direct award by the Secretary of State for Health and Social Care of three contracts for the production and supply of rapid Covid-19 antibody tests (the “Contracts”).

Insolvency – Termination and Beyond

Rachel Murray-Smith and Clare Mendelle consider the potential warning signs of, and the compliant manner for dealing with, contractor insolvency.

In the case of Farnham-Oliver v RM Educational Resources LTD, the Queen’s Bench Division of the High Court allowed a Personal Injury claim (“PI claim”) to be pursued by an employee against his former employer despite the parties signing a Settlement Agreement in respect of an Employment Tribunal claim on the same issue. Julie Bann and James Hughes report.

Rachel Murray-Smith and Francesca Gallagher look at the detail of the government's guidance on compulsory vaccination for care staff.

In the recent case of Eco World Ballymore (EWB) v Dobler[1] , an Employer took the unusual position of challenging their own entitlement to liquidated damages (LDs) on the ground that the LDs provision constituted an unenforceable penalty clause. Clare Mendelle and James Goldthorpe investigate.

Clare Mendelle and Anna Sidebottom examine the recently decided case of Toppan v Simply[1], which has provided guidance on when collateral warranties may be considered “construction contracts” under the Housing Grants, Construction and Regeneration Act 1996 and so give the warranty holder the right to adjudicate.

Rob Hann asks how central & local government departments and councils can work together more effectively to combat the challenges to achieve net zero by 2050.

The Judicial Review and Courts Bill

The Judicial Review and Courts Bill was introduced to the House last week on 21 July 2021. William Rose and Anna Sidebottom discuss the potential impact of the bill.

The Government has announced that people working in care homes in England must be fully vaccinated against Covid-19 from October 2021, unless they have a medical exemption, write Rachel Murray-Smith and Francesca Gallagher.

When procurement law and contracts for interests in land meet

Colin Ricciardiello provides a case law update examining cases that have examined the overlap between a requirement to procure and a contract for the disposal of an interest in land.

Last week the Government published its new Subsidy Control Bill. The Bill represents a significant shift in the way in which subsidies are assessed and also provides some clarity about the regime that will replace the EU State aid regime, writes Peter Collins.

The Government recently published the Procurement Policy Note 06/21. This will require suppliers bidding for major government contracts to provide a Carbon Reduction Plan at the selection stage and commit to achieving Net Zero by 2050, writes Clare Mendelle and James Goldthorpe.

What a bind: Section 106 planning obligations where there are multiple land interests

Rachel Lee and Christos Paphiti consider whether the case of R (on the application of McLaren) v Woking Borough Council impacts upon local planning authorities (LPAs) ability to properly consider the land interests and parties as regards to performance of specific obligations.

Colin Ricciardiello looks at the use of expert witnesses in the wake of an important recent decision.

The High Court has ruled that the Minister for the Cabinet Office, Michael Gove, broke the law by giving a contract to a market research company, Public First, who are run by long-time associates of his. Anna Sidebottom, Francesca Gallagher and Clare Mendelle report.

Time after time: extending time for determination of a prior approval application

The Cram Slam – Part 26A Restructuring Plans and Commercial Leases

David Nelson looks at the impact on landlords of a controversial High Court decision to allow a restructuring plan for a chain of health clubs.

The limits of an adjudicator's jurisdiction

Environment Act 2021: What Does it Mean for Waste Authorities?

ESG and its relevance to the public sector

Rachel Murray-Smith, Clare Mendelle and Laura Campbell discuss a common Construction scenario regarding the Practical Completion of a project, and the position under the unamended JCT DB 2016.

The importance of due process, communication and fairness in employee conduct investigations – what you need to know.

Julie Bann and James Hughes discuss the importance of fairness in employee conduct investigations, taking a look at the London Borough of Hammersmith and Fulham -v- Mr S Keable case.

The LADs are Alright

Laura Campbell discusses liquidated damages in construction contracts, focussing upon the long-running Triple Point saga which ended in the Supreme Court this year.